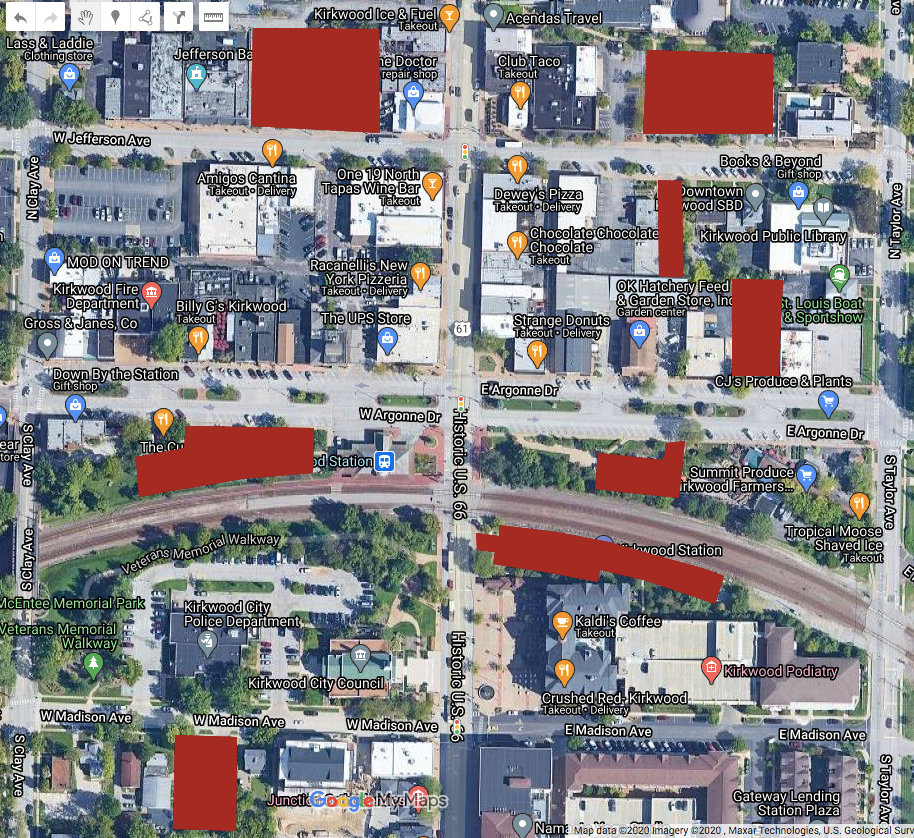 Take advantage of the prizes, balance the books in Kirkwood

A few weeks ago, I went over some of the ideas that could be learned from the failed vote on Proposition 1 (a Transportation Development District (TDD) with a 1% sales tax). This week I want to come up with some ideas to fill the funding hole that prop 1 remains. As I said then, Kirkwood still has some potholes to fill, bike paths to build and trails to build. And whatever your take on how the city’s rulers have handled its funds in the past, the money always has to come from somewhere. I suggest we implement a three step plan to close this gap.

First of all, I suggest that we put together some seed capital while simultaneously improving the town planning of Kirkwood. The town has seven public parking lots in downtown Kirkwood that provide free parking for downtown shoppers and diners. While Kirkwood has long struggled with perceptions that there is not enough downtown parking, several analyzes have suggested that the problem is primarily a perception issue and that downtown Kirkwood has sufficient parking facilities. parking to welcome visitors.

If this is indeed the case, Kirkwood should definitely consider getting rid of some of his excesses and doing something more productive with them. This is because above ground parking lots are really bad for walking.

While on-street parking can be used for things (cars do a great job of separating pedestrians from high-speed traffic), parking lots are a hindrance to walking. They expand businesses further, making it less convenient to walk from one to the other and more likely for people to drive and park at each individual stop. Surface parking also makes the walk less pleasant. Instead of window shopping or watching people walk on patio seats, pedestrians walking along parking lots can feast their eyes on rows of cars. Surface parking lots also cost the city money directly in paving, plowing and maintenance.

More than anything, surface parking represents a significant opportunity cost. Each surface lot represents missing businesses that could provide residents with new amenities and additional tax revenue to the city. To try and offset this cost (and raise some seed money to fix the streets issue), I suggest that the city run a Request for Proposal (RFP) on one of these seven lots.

Tenders allow developers to submit bids for the purchase of lots as well as plans for what they would build on them. If the city doesn’t like the offers they get or the amount of money offered to them, we keep the lots and get a bunch of information on what the market for those lots looks like.

Corn, if, on the other hand, a developer offers a million dollars to buy the land and build, say, the perfect, quaint boutique hotel of our dreams in the heart of downtown Kirkwood, suddenly we are in business. The town is benefiting from equipment that we have long seen as a high priority, we are saving money on maintenance that parking would otherwise have required, and we are making Kirkwood a more pedestrian-oriented community.

For our purposes, the main takeaway is that the town would get a windfall of revenue that, given the Prop 1 fiasco, we could use a lot. In addition to the hotel-generated sales taxes that would flow into city coffers, the plan would bring in a large lump sum of money from the sale of the land itself.

Now that we have earned this money, the question is what to do with it. I think the answer here is to set up paid parking throughout the city center. Paid parking is great because, just like step 1, it does two things: it makes Kirkwood more pedestrian-friendly while also generating additional income for the city in the future.

Because paid parking is quite a conflict, I want to justify it a little more. Many people argue that paid parking would hurt local businesses, but most of the evidence suggests the opposite is true. Parking encourages people to shop or eat and then leave to make room for more customers and diners rather than linger afterwards. Ideally, paid parking also makes parking easier. By charging an appropriate price, we can ensure that approximately two spaces are available on each block for those who really need to park. If less than two places are available per block, the price is simply increased, and if the price is too high and no one is driving, it is lowered until the optimum level is reached.

Paid parking is also a good source of income for the streets, especially for several reasons. First, it helps raise funds for roads from the people who use them: the drivers. By collecting this money, paid parking also discourages people from driving when they really don’t need it by charging them to do so. This means fewer cars on the streets and less wear and tear on our roads (and therefore lower maintenance costs).

If you’ve been convinced, the good news is Kirkwood has already done the costly part. Last May, Kirkwood quietly added a massive tech upgrade to its downtown parking lot as Chesterfield-based tech company Fybr installed measurement technology under 275 of the city’s downtown parking spaces for free. city. (The company plans to use the facility for demonstrations to future customers).

While Kirkwood currently only uses the technology to help drivers find free spaces for free parking, Fybr’s technology is capable of much more. For example, in big cities like San Francisco, Fybr has been used to set up paid parking at an incredibly efficient level. The app can be used to pay parking meters directly, significantly reducing or eliminating the cost of installing physical parking meters. And because the system tracks seat availability in real time, things like dynamic pricing (pricing that adjusts up or down based on demand in real time, block by block) become possible.

Considering this already substantial investment (again, the one we got for free, you can download the Park Kirkwood app here and see for yourself), the cost of adding a few hundred more seats to the system and of its monetization is probably relatively low. .

Okay, now that we have a consistent and fair stream of income, how do we use it? Welcome to step 3.

3. Revenue from paid parking goes to the streets

Established best practices for paid parking state that revenue should be spent locally (in the general area where the paid parking is located) to build support for the measure among businesses and residents that the change will have the most impact. direct. Even more ideally, the revenues should be spent on improving walking and cycling infrastructure to facilitate these modes of transportation for those who drove when parking was free but who, because of the fees, were incentivized to change their behavior.

One problem here is that while some of the streets that need improvement are close to the city center, many others are not. It doesn’t matter, however. We need to prioritize the roads closest to the city center first, and we can move on to projects further and further away as more funds become available. The city has some money to be spent on the streets even without the additional funding from Proposition 1 so that the existing kitty can be used to fund the most needy roads outside the city center more quickly.

As I noted in my previous post on the proposed Frisco Trail, driving, public transportation, and the ability to walk operate on a feedback loop. If it is easy to drive and park, people will continue to do so. If we make it more difficult or more expensive, people will change their behavior and use another cheaper and safer form of transportation.

Metro works the same way. They route the buses to places where they know people will use them, and people will only use these buses when taking the bus is a better option than driving. In a community that will likely continue to see increased density and therefore increased traffic in the years to come, it is important that we establish these transit routes now so that personal traffic does not become a compelling constraint. to this growth.

On another planet, we might be indifferent to the choice between car and public transport beyond the effect of this slight increase in traffic. But on this planet, where climate change depends on these kinds of choices, we should do all we can to get people to drive less and to walk, cycle and take the bus more. What if our means to access it also give us a long-awaited hotel and fundraising device to improve our roads, bike paths and long-term bus stops? All the best.

2021-11-16
Previous Post: Select Popular Kindle eBooks for $ 4.99 or Less Today
Next Post: Financial books: gifts to give for Christmas | Islander